"Come to me, all you that labour, and are burdened, and I will refresh you." 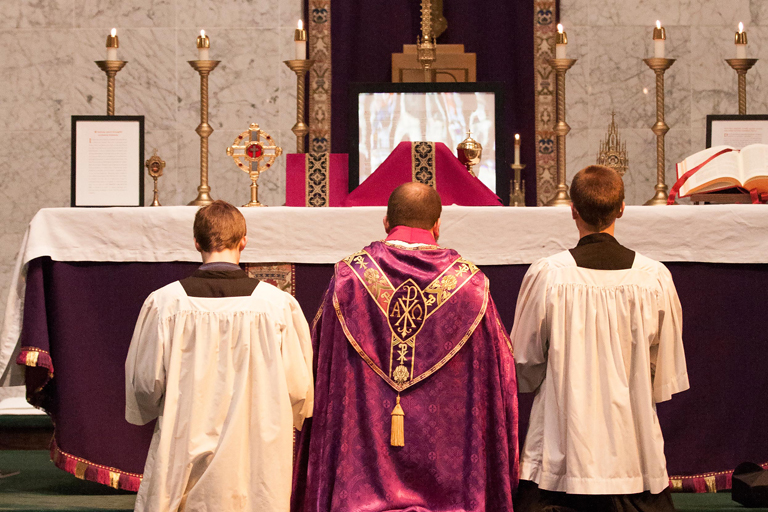 The Latin Mass at Holy Family

The Traditional Latin Mass at Holy Family Catholic Church in Latrobe, PA is celebrated every Sunday at 1 PM (High Masses 2nd and 4th Sundays). It is celebrated in complete accordance with the directives issued by Pope Benedict XVI on July 7, 2007 in the document Summorum Pontificum. Mass in the extraordinary form was first celebrated at Holy Family Catholic Church on the first Sunday of Lent, 2013.

"The Most Beautiful Thing This Side Of Heaven."

Sung by our Schola Cantorum on the 2nd & 4th Sundays at 1pm.

Join us after High Mass on the second Sunday of the month for our potluck social in the lower hall of the Church - all are welcome!

"The main place should be given, all things being equal, to Gregorian chant, as being proper to the Roman Liturgy."

High Masses are sung by the Schola and directed by Father Stephen Concordia, O.S.B. director of Programs in Sacred Music at Saint Vincent College in Latrobe, PA.

"What earlier generations held as sacred remains sacred and great for us, too."

Welcome to the Traditional Latin Mass. You are about to participate in a form of worship that has been celebrated in the Roman Catholic Church for 1500 years. You will pray the same Mass that countless Saints and Martyrs have prayed, and which they found to be an inestimable source of holiness and peace. We welcome you to this ancient, sacred, and majestic liturgy.

If this is your first Latin Mass – or first in many years – you will undoubtedly be struck by certain differences: the use of Latin, the priest facing the High Altar, the meditative silence that imbues parts of the Mass, the reception of Communion at the altar rail. These elements are explained below.

Latin is the official language of the Church, and has been used in the liturgy since at least the 3rd century. At Vatican II, the Church declared that the use of Latin was to be preserved in the Mass. Why? First, it highlights the sacred nature of the Mass when we use a special language in the sanctuary, rather that the common tongue of society and the marketplace. Second, it ensures that the prayers of the Mass are safeguarded for all time when they are recited in Latin, a “dead” language whose words never change in meaning. Third, it fosters a unity of belief among Catholics everywhere when a single language is used to celebrate the Mass, crossing nations and nationalities. Fourth, it allows us to pray as our forefathers have prayed, forming a continuum of prayer from generation to generation.

The best way for you to follow along with the Mass is to use the Red Missalettes provided at each entrance of the church. All the prayers are given in Latin and English. You’ll find that the prayers themselves are beautifully composed—they lift the heart and mind to God. As you are becoming familiar with the Mass, instead of reading every prayer, you may find it easier to simply watch, listen, and unite yourself interiorly to the actions of the priest at the altar.

Why doesn’t the priest face us?

In the Traditional Latin Mass, the priest serves as Mediator between God and man, leading the congregation in prayer as he offers the Holy Sacrifice to God the Father. We all face “liturgical east,” where the sun rises and from whence Christ will return at His Second Coming, according to traditional belief. Over the centuries, the east has come to symbolize Christ Himself—the center of our existence, just as the sun is the source of life in the natural order. Praying toward the east has been the custom of the Church for at least a thousand years. You will notice that the priest does turn to face us whenever he is speaking to us—for instance, during the sermon when he preaches to us, before several prayers of the Mass when he says, “Dominus vobiscum” (“The Lord be with you”), and at the end of Mass when he blesses us. At other times, he faces east and addresses God.

The Mass is a profound encounter with Mystery—God becoming man, sacrificing Himself for our sins, and nourishing us with Himself in the Blessed Eucharist. So great a Mystery cannot be fully related by words or grasped by the human mind. The Traditional Latin Mass does not attempt to explain it. Rather, it leads our souls into the depths of this Mystery with rich layers of prayer and ritual, music and art, symbolism and silence. Silence fosters prayer. Quietness and tranquility prepare our soul for the Holy Ghost. Silence itself communicates, often more so and better than words. Your participation in this Mass will be more interior, but no less real—a turning of your mind and heart to the Eucharistic Lord.

How should I receive Communion?

The Catholic Church requires that Holy Communion at this Mass be received kneeling and on the tongue. “Amen” is not said before receiving. [ For those unable to kneel, standing is permitted, and for those unable to approach The altar rail, the priest will bring Communion to you in the front pews. j Receiving Communion kneeling and on the tongue is an ancient practice of devotion and reverence to the Most Blessed Sacrament—Christ’s True Body, Blood, Soul, and Divinity. As St. Thomas Aquinas expressed: “Out of reverence towards this Sacrament, nothing touches it but what is consecrated.” All are reminded that Holy Communion may be received only by Catholics in the State of Grace (not knowingly in a state of mortal sin) who have fasted for one hour.

Welcome to Our Community!

In July 2007, Pope Benedict XVI issued an Apostolic Letter to expand celebration of the Traditional Latin Mass worldwide. He wrote: “What earlier generations held as sacred remains sacred and great for us, too.” The Latin Mass has been offered at Holy Family Catholic Church every Sunday since Lent of 2013. This Mass was described by the great Catholic writer, Father Frederick Faber, as "The Most Beautiful Thing This Side Of Heaven." We hope and trust that you will find it so. We invite you to come back, and come often, to pray the beautiful Latin Mass with us, to pray as our forefathers have done for so many centuries, that you may find in this rich, transcendent liturgy a place of solace and true spiritual joy.

"What was sacred for prior generations, remains sacred and great for us as well, and cannot be suddenly prohibited altogether or even judged harmful".

Find Us On Social Media!